“Youth was made not for pleasure, but for heroism”
(Paul Claudel)

In order to build healthy and close relationships between young people from all walks of life, the St. Benedict Network regularly organizes seminars, lectures and conventions. These seminars offer solid intellectual formation to foster faith and leadership.

A WORD FROM THE PRESIDENT

Welcome to the website of the “Saint Benedict Network for Christian Youth,” an initiative of the European Institute of Social Sciences – IESS.

The « Saint-Benedict Network for Christian Youth » was created by people of all ages but mainly by young people with the aim of building healthy and close relationships and developing a solid intellectual education to promote Christian values in today’s society.

For this end, the « Saint-Benedict Network for Christian Youth » regularly organizes seminars, lectures and meetings for youths from France and other European countries in an atmosphere of courtesy and respect. The purpose is for participants to exchange their points of view on most varied subjects: national and international news, religion, culture, history, sociology, philosophy, etc.

If you are a young person motivated by and sensitive to the fundamental problems of our society, join us in the “St. Benedict Network for Christian Youth”.

Looking forward to meeting you soon, I wish you a very good visit of our website!

Francisco Pignatta
President of the Saint-Benedict Network for Christian Youth

WHY IS SAINT BENEDICT THE PATRON OF OUR NETWORK?

To understand our choice, a brief historical reminder is necessary.

As the last quarter of the fifth century begins, barbarian invasions continue to spread throughout Europe. The general situation is very volatile. In society, corruption ravages all levels, from governors and officials to private individuals. Degradation affects both civilians and religious.

This situation creates in the population a general feeling of insecurity and instills a deep mistrust regarding the institutions. Then, in the year 480, the little Benedict (“the blessed one ») is born in Norcia (Italy).

Coming from a noble and Christian family, Benedict went to Rome as a teenager to study law and classical literature. Shocked by the Roman way of life and the moral disorder in which his colleagues are plunged he decides to flee the city and gives up the career he had been promised in order to devote himself entirely to God’s service. He chooses to live as a hermit in the Subiaco Valley.

However, the influx of visitors and pilgrims quickly forced Benedict to leave his cave in Vicovaro and create the first European monasteries with a common rule. The discreet apostolate of these monasteries greatly influenced Europe’s social and religious life throughout the Middle Ages and was the seed of a new civilization.

That is the reason why Pope Paul VI proclaimed St. Benedict as patron of Europe. In his address he explained that decision was due to the state of society, which “needs to draw new vigor and splendor from its Christian roots, for which it is greatly indebted to Saint Benedict, who has nourished them with his spirit.” Further, in an apostolic letter Paul VI added: “At the fall of the crumbling Roman Empire, while some regions of Europe seemed to have fallen into darkness and others remained as yet devoid of civilization and spiritual values, he it was who, by constant and assiduous effort, brought to birth the dawn of a new era” (La Documentation Catholique, 46e année – T. LXI – Numéro 1436, 15/11/1964, Col. 1441-1448).

Following the example of Saint Benedict, who created a new, civilizing mentality, and with his help we hope to have the courage, patience and perseverance to face the challenges of today’s world.

OUR SEMINARS, CONFERENCES AND LECTURES

The seminars, conferences and lectures offered by the St. Benedict Network intend to teach the meaning of beauty, goodness and truth, to encourage reading and reflection, and foster solid friendships and a sense of responsibility. They aim to contribute to transmit the values of our Christian heritage to younger generations.

In this sense, our seminars transcend a mere communication of content. They seek to achieve what prof. Philippe Le Tourneau, professor emeritus at the Toulouse Law School has formulated thus:

“Man is not only intellect but also sensibility. So in order to understand and learn, if you only have recourse to your intellect, that is, your brain, the task will be difficult. You must also put to work your sensibility, that is, your heart. How? By loving your work and by looking for its curious, original and exciting sides. Thus, the joy of working is associated to that of the mind (dilatatio mentis) and that of the heart (dilatatio cordis), according to a formula by St. Bernard (1091-1153). That changes everything!” [1] 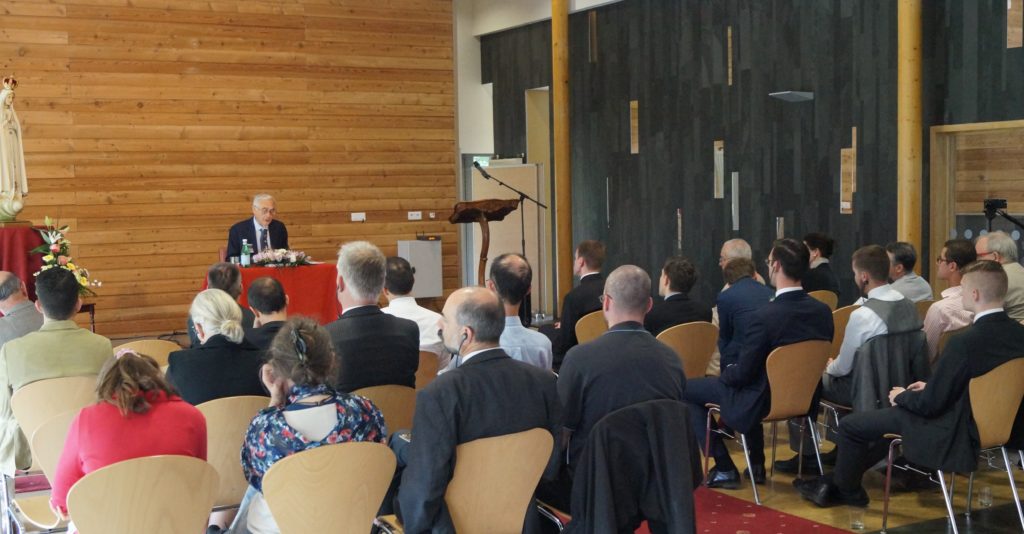 From Friday 6 to Sunday 8 July, the first summer university of the Saint Benoît Network was held in Creutzwald, Moselle, around the theme “May ‘68, Fifty Years Later.”

The meeting was marked by the high quality of the speakers, who approached the Sorbonne events from different angles, each in his field, to make an expert assessment of those pivotal developments. Professor Stéphane Mercier, PhD, a former lecturer at the Catholic University of Louvain, scandalously dismissed by its hierarchy for taking a stand against abortion, expounded with great clarity the philosophical roots of May 68, particularly the most important ones, relativism and materialism.

Professor Roberto de Mattei, former vice-president of the Italian « CNRS » and author of many authoritative works on the history of the Church, showed the similarities between the demands of the May 68 demonstrators and those of « progressive » churchmen who have strived to force the Church to approve contraception. Although contradicted by Paul VI’s encyclical Humanae Vitae, published in July 1968, they and their heirs have not ceased to undermine the moral principles on which Christian marriage is based. Finally, economist Mathias Von Gersdorff, a member of the IESS’ Scientific Council, gave an in-depth analysis warning against May 68 tenets that continue to affect our societies, including gender theory.

In addition to the lectures, which were highly appreciated, on Saturday, July 7th a cultural program was offered to participants of the Summer University and local residents, with a superb concert by Laureen and Marlo Thinnes at the city’s Holy Cross Church. On Sunday, July 8th, the film The Hidden Rebellion was screened in the presence of director Daniel Rabourdin at the city’s Sociocultural Hall, where the lectures had been held. The concert aroused the enthusiasm of listeners, enchanted with so much talent, who had a similar reaction to Mr. Rabourdin’s film, which staged the often-hidden atrocities committed against Vendeans during the Terror for their fidelity to the Church and the King.

After such an enriching weekend, we are naturally considering to hold a second edition of St. Benoit’s Network’s summer meetings… See you next year!

January 2018: Seminar on “The Origins of the Crisis in the Church”

During the end of the year holidays, a seminar was organized on « The Origins of the Crisis of the Church. » 24 young people from 8 European countries and Brazil participated.

The lectures described the philosophical, theological, political and social currents which, together with the liberal Catholicism of the nineteenth century were at the origin of the various “liberation theologies” of the last century, in the wake of Modernism and the so-called « New Theology”.

In addition to lectures, cultural and sporting events were also organized. Participants nourished their spiritual life every day by participating in the Holy Mass and reciting the Rosary in the oratory of Villa Notre-Dame de la Clairière.

August 2017: Debate on the book Return to Order: from a Frenzied Economy to an Organic Christian Society 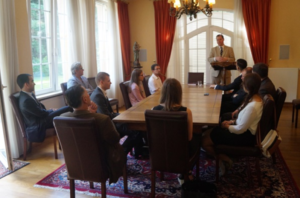 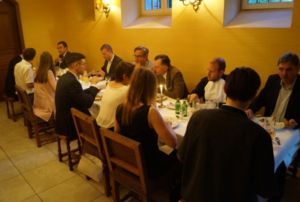 This book, written by American scholar John Horvat II, describes the origins of the current economic, political and social crisis in America and the West and proposes Christian society as a solution.

The debate was moderated by James Bascom, a member of the Sedes Sapientiae Institute who came from Pennsylvania to stay a few weeks in Creutzwald.

The day ended with a meal and a pleasant evening on the terrace of the Villa.

May 2017: Seminar and public lecture to study the relationships between music and revolution 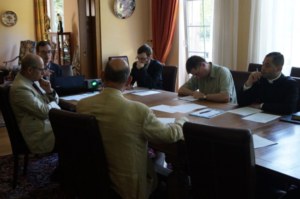 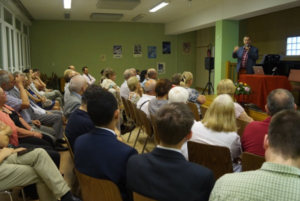 During this seminar led by Mr. Philippe Sangnier, a musicologist and specialist in the relationship between music and identity participants looked at the evolution of musical art through the centuries and how it expresses changes in society.

Mr. Remi Gousseau spoke on the theme: « Music and the Church Since the French Revolution – French and European Perspective of Sacred Christian Music or Rite and Artistic Creation ». 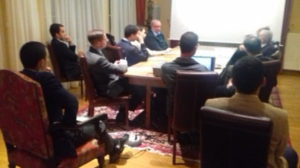 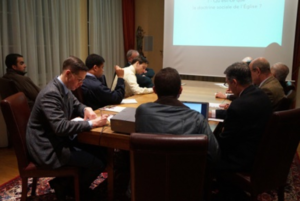 They focused on the topic of Church social doctrine. At all times the Catholic Church has endeavored to offer teachings in order to provide answers not only in the religious sphere but also to the social questions that agitate men in society.

Facing the radical transformation that the industrial revolution had brought about in certain countries, in 1891 Pope Leo XIII published the encyclical Rerum novarum.

Responding to the great misery of workers he unambiguously condemned socialism, which promotes class struggle while social classes must be united in harmony and concord, but also reminded that capitalists must not forget that man is at the heart of economic issues and not merely a working tool.

This is a line difficult to hold but which the Church proposed to maintain a proper balance.

Pope Leo XIII also urged Catholics to engage in the social area by founding Christian associations and unions. In the Moselle, for example, Catholic Workers’ Circles or « Katholische Arbeitervereine » flourished soon after the invitation of the Pope: Porcelette-Diesen and Morsbach in 1891, Rosbruck in 1892, Carling in 1902, Falck in 1903, and many others.

The first seminar studied especially the question of private property, a right man possesses by natural law and which is a means to stimulate his dynamism to work. During the April 22 and 23 seminar the speaker presented what the Popes have taught about the institution of the family and its importance in society.

The two seminars were led by Olivier Jarry, who holds a master’s degree in theology and is deputy director of a Catholic school for boys in the Vosges region where he teaches literary and historical subjects.